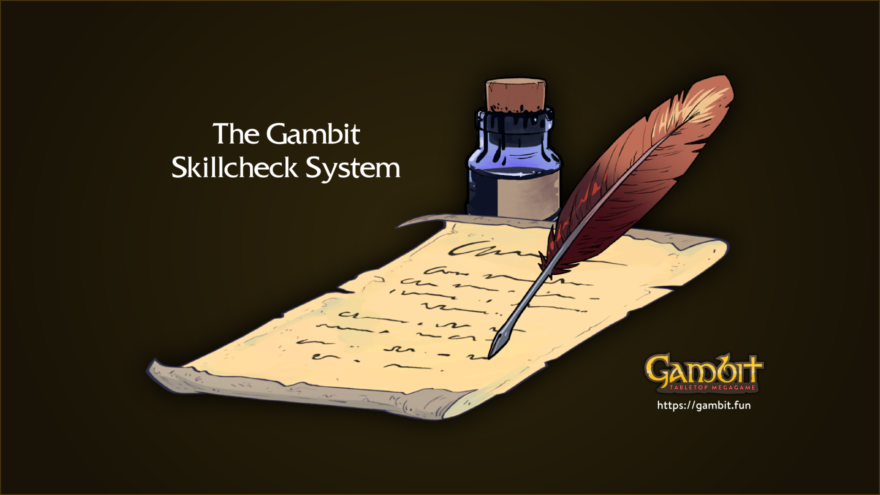 I’ve played a lot of RPG and tabletop games in my life. There are a multitude of skillcheck systems, from the d20 system used in Dungeons and Dragons, to various implementations of d10 systems or percentile systems. For Gambit, we have a few constraints that make many of these skillcheck implementations impractical. In order to solve these problems, we’ve created a new skillcheck system for Gambit that we are excited to share.

To begin, let’s look at the Dungeons and Dragons’ d20 based skill system. The idea is that you roll a single, 20 sided die, and add whatever bonuses you have to the roll. In order to succeed the check, you need to have this total meet or exceed a certain difficulty rating. This system has the benefit of simplicity, but it does not scale very well. In most tabletop RPGs that use the d20 skillcheck system, bonuses rarely exceed 10 or so. This is because as bonuses increase, the relative value of the die diminishes.

For example, if you needed a score of 18 to succeed a check, a bonus of 7 or 8 feels impactful, but a good roll is still necessary. If you instead need a score of 30 and have a bonus of 20, you still need the same roll on the die to succeed, but now it feels like large bonuses are more necessary. This problem is accentuated because players will have a wide range of bonuses. Additionally, as you increase the difficulty of skillchecks at exactly the same rate as players’ skill bonuses, so that a d20 is always sufficient for them to succeed with the same probability, the RPG treadmill becomes very apparent.

Whenever players make a skillcheck, two numbers are relevant. One is the difficulty of the check, and the other is the score of the skill for that check. The most common skillcheck is an attack, so I’ll use that example. If our knight decides to attack a Grue, they take the monster’s defense rating as the difficulty for the skill. We’ll say it is 16 for this example. The skill for an attack is hit rating, and we’ll say the knight’s hit rating is 10.

The knight player selects any number of polyhedral dice so that the total number of faces equals or exceeds the difficulty. For example, they might select a d6 and a d10, or two d8, or four d4. However, they cannot select a die if it has more faces that their ability score, so the knight could not select a d12 and a d4. Then, the knight rolls these die and totals his rolls. If the value is less than their hit rating, the attack lands.

While slightly more complicated than just a single die, this system gives a number of advantages. First, it lets the system scale very nicely, and makes each improvement feel impactful. Even numbers, up to 12, and then again at 20, feel impactful because you have more options of dice to roll. The feeling of improvement is tactile, because players are rolling more dice, and larger dice.

This system behaves nicely at large numbers. With a typical d20 system, we would need to make defensive items very rare, as is the case in Dungeons and Dragons. If your defense is ever more than 20 greater than your opponent’s hit rating, then hitting is impossible (ignoring guaranteed hits on 20). The viable window is narrow. But with the Gambit Skill System, this viable window widens as the numbers increase. Players (and enemies) can’t be so easily locked out of ever succeeding an attack or skillcheck.

This system also naturally extends to group skillchecks. Players simply add the relevant scores, and the player leading the skillcheck decides what to roll. Both the difficulty of checks and the skill scores of players can scale up easily.

We also like that this skill system gives players have some choice when deciding what to roll. Determining the best dice combination is somewhat non-trivial (it’s related to the Knapsack Problem). Because critical strikes are determined by whether the attack roll is also lower than the critical strike rating, it can be extremely difficult to determine which dice combinations are optimal. Often, the dice most likely to give a critical strike are not the dice most likely to hit.

We’re excited to playtest more with this system, as we think it gives a fun dynamic to skillchecks that is absent in many other RPG systems. We’re happy with how it plays out in our tests, and we also already have so many ideas for how abilities and items might interact with this system.

One comment
To show your photo in comments, combine it with your email address at https://gravatar.com