In October of 2014 I read a blog post by Justin James Clayden called “‘Journey to Justinia’, or How I got my 5 y/o son to sit still and concentrate for almost 4 hours.” The author of this article had a son that liked mazes and Justin would draw them for his son regularly. The maze drawing process got Justin thinking about creating a new type of game: a simplistic role-playing game based on a 2D maze that a 5 year old could understand. Despite Justin’s self-proclaimed limited artistry, the result was a game he called “Justinia” that was very successful at keeping his son focused and entertained.

At the time my oldest child had just turned 4 and he was fascinated with mazes. He asked me to draw mazes for him to solve nearly every day. It was also at this time that I was getting more into tabletop RPGs. So when I came across this blog post, it felt like it was meant for me. I immediately got to work on my own versions of Justinia levels and aimed to add additional features. I was eager to play this newly discovered game with my son and a day later I came up with my first level: 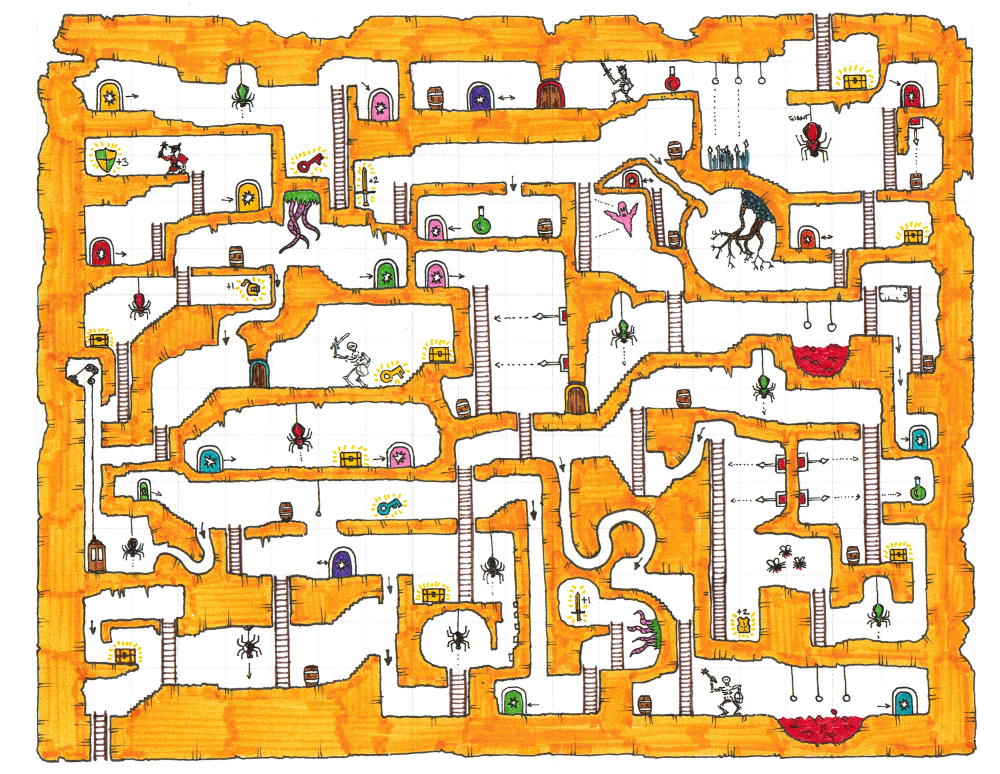 Admittedly, my son was a little young to fully understand what was happening, but that did not inhibit his fixation with the game. Upon completion of the level, I got started on level 2. A day or so later I came up with this: 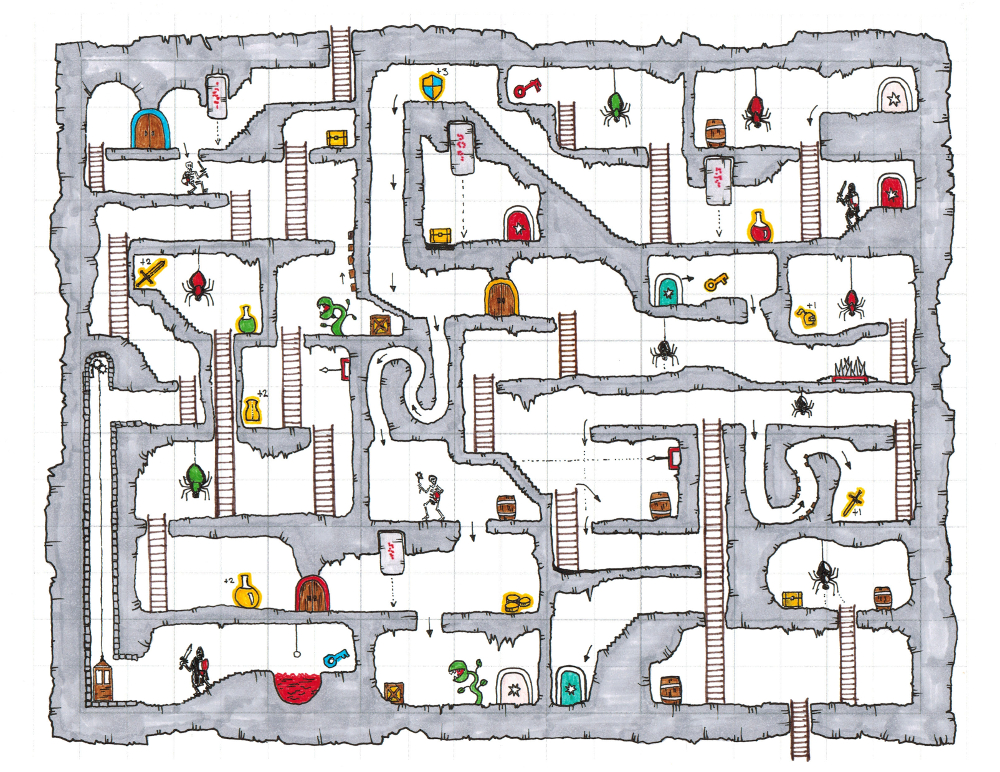 We played through this second level with equal joy and then something occurred to me:

“Making levels that can be played through once or twice is not very efficient.”

I decided to come up with something modular, akin to a procedural generated level you’d find in a Roguelike video game. What if I made interchangeable tiles that formed levels?

In light of this decision, it seemed to make more sense to change the orientation from being a 2D side-view game (like Metroid or Castlevania) into a 2D top-down view (like the original Zelda). The result was a page of 1×1 inch tiles that I drew, scanned, printed, cut, and adhered to adhesive magnets: 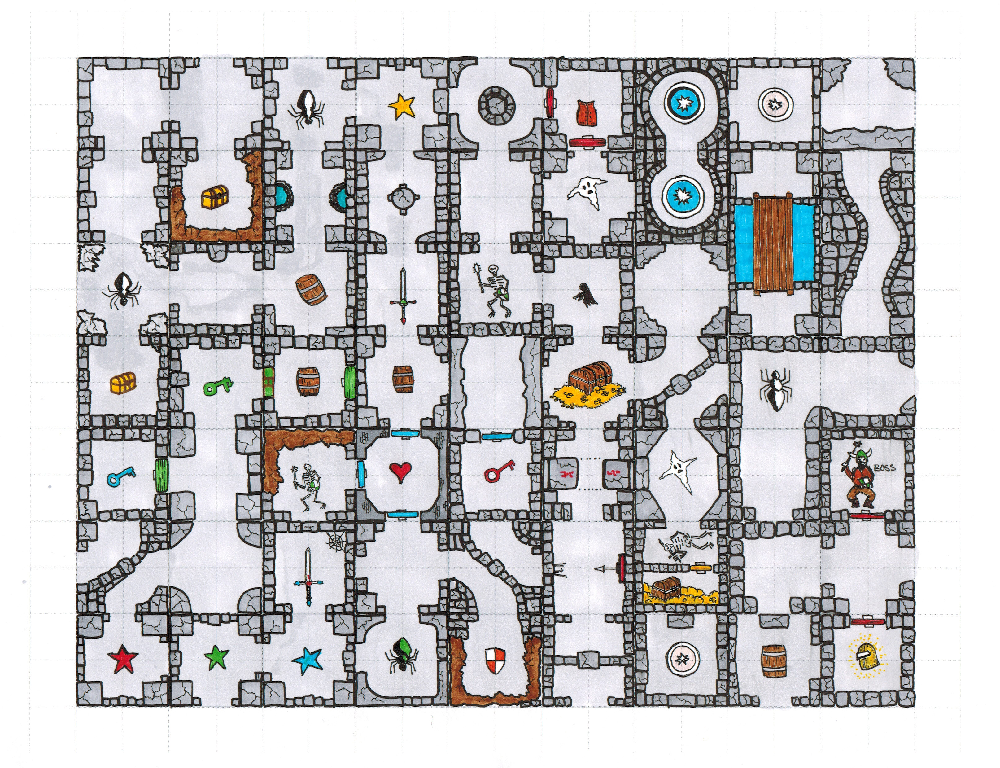 This afforded a few unique levels, but I didn’t plan well for all the tile shapes that I needed. For example, I didn’t draw enough concave corners. The other problem was that I drew all the rewards, enemies, containers, and other adornments directly onto the tiles, an artifact leftover from the Justinia style game. This significantly limited the modular ability of the tiles.

In my tabletop RPG experience (special thanks to Josh for introducing me to them) I’ve noticed some people (like me and most kids) are really into the visual elements, detailed maps, and props. Others are content imagining everything. The problem with a highly visualized tabletop experience is that it is very time consuming to create all the assets, which then may not get used more than a few times. For example, in one of the D&D campaigns I played in, I drew two maps for the DM to use. They were well appreciated, but each was only used in a single session. This is the same limitation I ran into with Justinia. Others have experienced this as well, which is why there are numerous map generators and 3D printable tiles available for tabletop RPGs.

But it wasn’t just modular maps that I wanted. I wanted to play an RPG with my son, but he needed more direction and structure than what a traditional RPG system offered. Many board games offered the structure my son needed, but most board games are not epic or campaign oriented. They are completed in a few hours, especially anything a young child is capable of playing. There’s no long term progression or grand story arch in a board game. At some point it became more apparent to me that what I wanted didn’t exist. Then I had an epiphany:

I wanted a highly visual and tangible tabletop RPG game with assets that could be reused over and over again. This meant that not only the map needed to be visual, but also the items, enemies, and character sheet. It needed to be simplified enough for kids to play, but unique and robust enough to engage adults.

This self-imposed design constraint changed my entire thinking about designing a tabletop RPG. How would a kid keep track of health points? How does a player know what they have equipped? How are stats updated when a character levels or obtains better gear? It was at this point I got serious about designing what eventually evolved into Dreamstate. I was also starting to realize that this project was growing a lot bigger than expected. I ran with it.

Over the past few years, Dreamstate prototyping has undergone two iterations. At the launch of this website in late 2018, we are now in the midst of developing version 3.