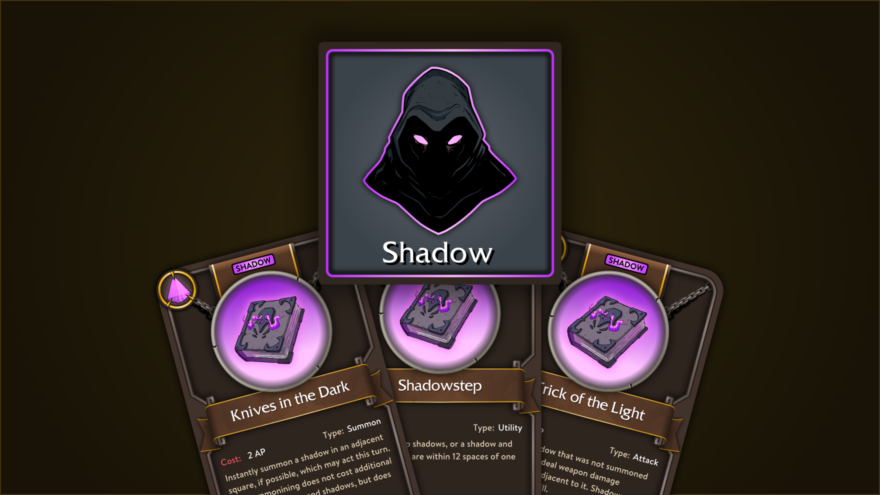 When we decided to make the Game Master a competitive player, we had to rethink stealth. Stealth as an RPG mechanic works when the GM operates as a semi-neutral agent. But if a player is competing against the GM, stealth doesn’t work at all. I came up with the initial idea of having the player remove their character’s real figurine (which has a distinguishing mark on the bottom), then place it back on the board along with identical decoys, allowing the player to position the decoys or the real figurine in the original square and then the remaining figurines in adjacent squares. They would then be given additional Action Points to move around the Shadows (using Shadow Points).

Caleb saw tremendous potential with this seed of an idea and developed it into its own, full blown Skill School. The video below highlights the first time Shadows were used in a playtest and something wonderful happened that we didn’t expect.

Early on, Shadows cannot attack or use skills, so Shadows’ main function is to act as decoys. We thought that as soon as the player makes an attack, it would become obvious which figurine on the board was the real character. What we didn’t expect was for a player to move the real character and a shadow in tandem to where they both remained adjacent to an enemy, and then say things like “the real one attacks.” This allowed the player to maintain the deception through combat actions. We were so happy with this unexpected maneuver that we wrote it explicitly in the game rule—that this is how you should play with Shadows.