We’re going to do better about keeping the website updated.

1. The second art set of level tiles (out of 3) have been drawn and processed 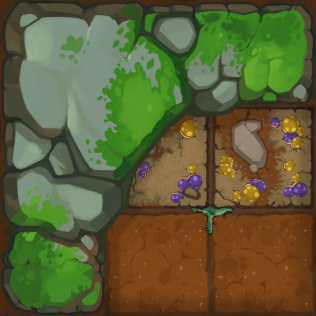 There are 63 unique level tiles in this set. Processing requires cropping each piece of art to the exact dimensions, adding in the details, modifying colors, and then assigning them to the database.

I was stuck on color modification for a while. Initially we had green moss on the floor and green moss on the walls. The problem with this is that there wasn’t enough color contrast for players to quickly differentiate between walls and floors. Getting contrast is easy, but getting the right contrast that looks good and achieves what we were aiming for was hard.

We’re ready to start testing this tutorial-style level, so it’ll be more limited in terms of size, loot, etc., but no less fun. For first-time players, it refrains from trying to introduce every single concept right away. We still expect it to take 4 hours to complete.

3. Enemies have been defined for the entire campaign

For quite some time, we’ve had short descriptions of the story arc written for each level, but we hadn’t defined what enemies players will be facing until recently. Character artwork for the enemies is now underway, so expect some visuals to come soon.

4. The GM’s Dungeon Deck has been revamped, simplified, and generally made cool

The GM competes with players and one tool the GM has at their disposal is the Dungeon Deck. The deck has suits and each card is named. Before the deck was a complex mess of over 100 cards. We reduced the number down to ~20 cards, 5 cards in each suit, and the rule changes measurably speed up the game.

5. Character progression measured by loot has been calculated

Characters progress in power by obtaining better loot. Scripts were written to define loot values and then a table was created to map out how the loot is distributed over the campaign. Having this roadmap was a key piece that needed to be defined before we started populating levels with all the riches.

6. Nearly all Skills have been defined and cards for levels 1 and 2 (out of 3) have been designed

All existing skills were reviewed in detail and improved and everything up through level 2 skills have fully designed cards and skill gem items. As it stands now, we have 99 unique skills and we are eager to see play testers come up with their own combinations and character builds.

BONUS: Dual-wielding rules have been revamped

Dual-wielding lacked distinction from two-handed weapons in terms of performance and there were no incentives to encourage players to run one type over another. Dual-wielding also seemed to double players’ turn times because they were always rolling twice as many attacks than a player only using one weapon. There’s now a benefit to landing attacks in sequence that speeds up the turn time. We also added an attribute restriction which provides a very unique approach to running a dual-wield character that we are eager to test.