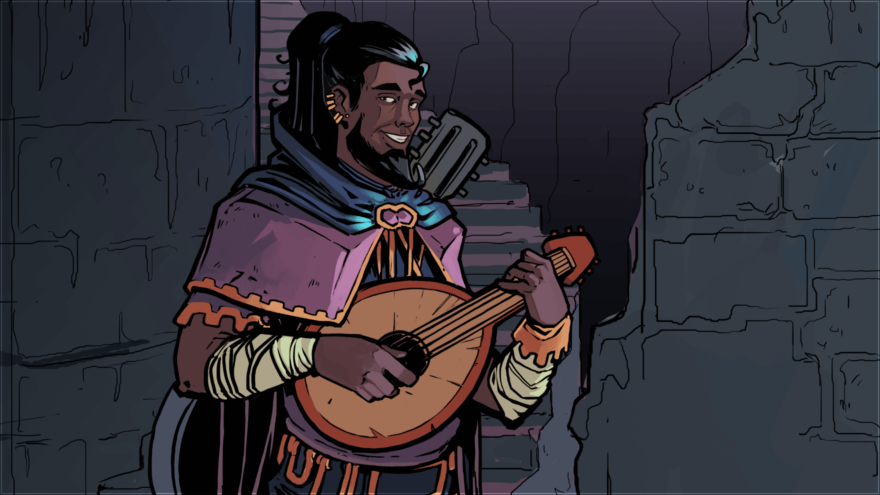 Your pack is full of the trapping of a traveling musician: colorful balls for juggling, flutes, even a lute. One of the flutes contains a sharp needle, long as your hand. A flask of a personal recipe is firmly affixed to the inside of the lute. Convincing a group of travelers to share their fire with a bard is an easy task. A few stories, a song or two, and then a night of free food and fire. Then you leave in the morning and your contract wakes up 12 hours later. Easy. Convincing an expedition into ancient ruins was much more difficult. You like a challenge. Thus far, your contract has eluded you, always accompanied by a handful of others. The expedition is large enough that sentries watch at all times, and sneaking from one tent to another then back is too dangerous. You suspect he knows why you’re here. But, one of these nights, he’ll slip up. If not tonight, then tomorrow. Or the day after.

We were initially going to hold off on releasing the Bard for a later expansion, but once we developed the mechanics for the Legend Skill School, we felt we needed to release the Bard at launch with such a unique skill school concept that we are excited to share. It is one of the more advanced skill schools that requires extra thought and planning to execute well We’ll cover this Skill School in a future post.

The last few weeks have been fairly quiet on the blog as Caleb has been finishing up his semester in his PhD program and I have been spending several weeks updating every level tile art file (close to 400 hi resolution files). I will showcase the art upgrade in my next post.